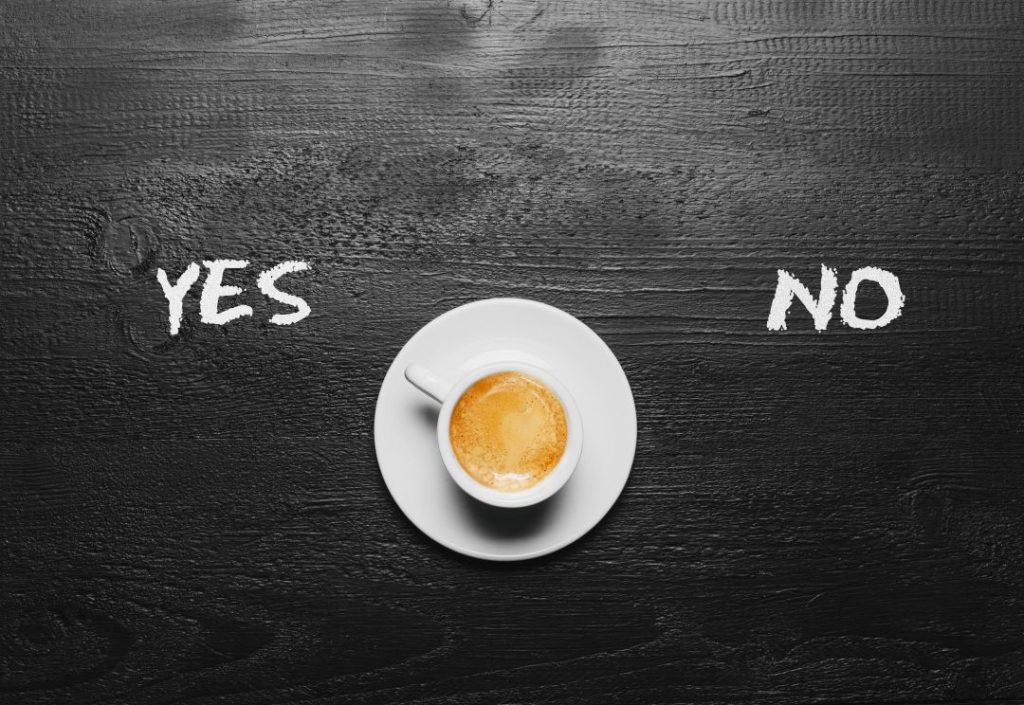 Despite its popularity as a fat-burner coffee plays a very different role. In fact, most caffeinated drinks may even cause weight gain.

Just how healthy is your daily latte? The possible problems can range quite a bit. But you can deal with most side effects if you know how caffeine really works.

How Does Caffeine Work?

Your body naturally produces a chemical called Adenosine. It starts building up in your system as you engage in different activities and the day progresses. Adenosine molecules bind to receptor cells in the brain. This leads to decreased neuron firing and the release of neurotransmitters [1]. You start feeling sleepy and tired.

Caffeine molecules (methylxanthines) have a similar shape to Adenosine. They block the same brain receptors. This prevents Adenosine from interacting with those cells [2]. It becomes hard for the brain to feel how tired the body is.

When Adenosine isn’t restricting neuron firing other neurotransmitters start stimulating the brain. As a result, adrenaline (epinephrine) and dopamine levels go up [3]. This causes increases in heart rate and blood pressure, and opening of the airways. You experience a stimulating effect.

Does Drinking Coffee in the Morning Prevent Fat Burning? 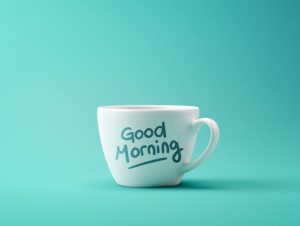 If you’re getting enough quality sleep you should wake up feeling rested and full of energy. Though it takes some time for the body to switch from sleep mode to being fully awake. Drinking a cup of coffee can help speed up the process.

But it’s not a substitute for bad sleep. If you can’t function properly without your morning coffee, you’re likely sleep-deprived. Caffeine only masks the problem. It makes you unable to experience just how under-recovered you are.

You go from feeling terrible to feeling normal. Subjectively it feels like coffee helps you wake up. Objectively your body is still in the same state, you just can’t feel it.

Poor sleep leads to decreased willpower, increased cravings, and might affect metabolism negatively. No wonder bad sleep increases the risk of unwanted fat gain [4]. Coffee abuse won’t impact your weight directly. But it can prevent you from addressing the real problem.

Does Caffeine Increase Your Energy and Gym Performance?

When we talk about “energy” we could mean two slightly different things:

Your energy levels reflect your perceived state of wakefulness and alertness. But not how much actual energy (fuel) you have. For example, fat is a form of stored energy. However, overweight people don’t feel more “energized” than lean individuals. In fact, it’s the exact opposite.

Food provides energy (measured in calories) and it can also influence how energized you feel. While other substances provide no energy but still affect how you feel. Caffeine and other stimulants are such examples.

Note that coffee has no physiological effect on athletic performance [5] [6]. It won’t make you stronger, faster, or more endurant. However, caffeine improves motivation and pain threshold. This can indirectly affect performance.

The placebo effect is also very strong. People may perform better because they believe coffee gave them “extra power”. They may push past the point when they normally give up. It’s a matter of crossing a self-imposed limitation. Not altering your genetic potential.

This being said, even a mild boost to your willpower can be useful. Used strategically, caffeine can help you overcome “bad” days.

Is Coffee Bad for You When Trying to Lose Weight?

Coffee consumption use is usually associated with certain dieting protocols like intermittent fasting or keto. However, the benefits are often overblown or nonexistent. Let’s examine the most popular myths.

Does Caffeine Speed Up Your Metabolism and Decrease Appetite?

Most research finds no effect of caffeine on metabolic rate [7]. Though very high doses may increase daily expenditure by about 100 kcals. But that’s still far from a notable increase.

Human metabolism is very resistant to changes. Apart from prescription drugs and hormone treatment, there are very few ways to significantly boost your metabolism.

What about appetite suppression? Some people report increased cravings when they stop drinking coffee. However, this is not the same as feeling physical hunger. Cravings can be emotional by nature, often times caused by boredom.

Let’s say you’re used to having a cup of coffee during lunch break. If you kill that habit, the trigger (lunch break) will remain. You’ll still feel the need to do something. It’s easy to replace that cup of coffee with a bagel. Research shows coffee consumption doesn’t affect appetite, just your habits.

What Happens if You Overdose?

Caffeine abuse doesn’t lead to physical addiction. Even very high doses of 500 mg or more won’t kill you. This doesn’t mean your health and well-being won’t be affected.

You may experience side effects such as erratic heart rate, restlessness, and anxiety. Most negative effects of caffeine intake become notable at around 150 mg a day [8].

Why Do You Build Up Tolerance? 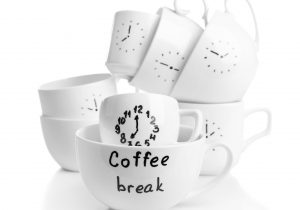 Regular consumption of the same amount of caffeine leads to building up tolerance [9] [10]. When the brain doesn’t get enough Adenosine it starts producing more receptor cells. To block the ever-increasing number of receptors caffeine intake must also go up.

You’ll become resistant unless you start altering your intake. One strategy is to keep increasing the amount. A more sustainable approach is to periodically stop caffeine intake for some time. Then resume your habits. Even small doses will be enough to reap the full benefits after  that.

How Do You Deal With Caffeine Withdrawal?

When you go off coffee, you’ll experience withdrawal symptoms [11]. The more you used to consume, the longer and more severe the resynthesization period will be. It may take anywhere from a few days to almost two weeks. Symptoms are most pronounced during the first few days.

You may experience headaches, fatigue, and lack of motivation. But the severity of the symptoms is rarely a problem and shouldn’t prevent you from handling daily tasks.

During a diet use caffeine strategically. There’s a point where increasing your intake yields almost no positives. But you start experiencing all the negative effects

Use coffee sparingly in the beginning, more liberally towards the last stages. A lot of people are already caffeine resistant when they begin their weight loss journey. Dieting is hard. You want to have one last ace in the hole when things get really tough.

Why It’s Not a Good Idea to Consume Caffeinated Drinks Before Bed? 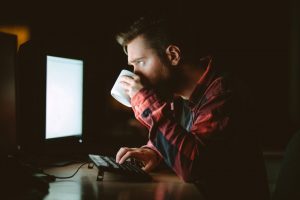 Caffeine peaks in the bloodstream 30 to 45 minutes after digestion. However, it’s half-life can be anywhere from 6 to 10 hours. This means several hours after drinking you experience half the effects.

Caffeinated drinks can disrupt sleep even if consumed a few hours before bedtime. Note that falling asleep, and total sleep time may not be affected. But sleep quality suffers [12]. Time spent in deep sleep stages is notably reduced.

This leads to poor recovery, low energy, increased cravings, and moodiness the next day. To combat this some people increase their daily caffeine intake. That makes the problem worse.

We’ve already discussed morning consumption. But it’s important to also pay attention to how late you have your last cup of the day. Avoid caffeine at least 8 hours before going to bed.

Can Caffeine Consumption Cause Weight Gain?

Coffee won’t prevent you from losing fat. Not directly at least. Caffeine abuse can indirectly sabotage your diet once you start experiencing the side effects.

But there’s another risk. Plain coffee contains no calories. However, most caffeinated drinks are energy dense. This is because of all the added sugar and fat. Total calories can range from 150 kcals for energy drinks to 500 kcals for some of the caffeinated treats in Starbucks.

If your goal is to control your weight, beware of the extra calories consumed. Go for zero-calorie options or a good old plain cup of Joe.

Should You Switch to Bulletproof Coffee or Keto Coffee? 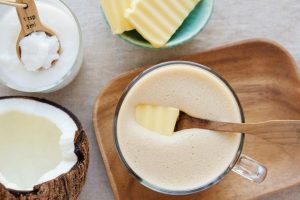 You get the same benefits of caffeine whether you’re consuming regular coffee or Bulletproof. Any improvements to your mental performance are because of caffeine.

The added fat in the product works the same way as if you were to spread butter on your toast. There’s no synergy between caffeine and saturated fat. Combining both doesn’t lead to notable chemical alterations or improved potency.

If your goal is to achieve or maintain ketosis the added fat will certainly help. But controlling total carb intake is far more important. Also, other fat sources are equally effective in promoting ketosis. Whether you’re consuming pure grass-fed butter or Keto Coffee makes no difference.

Unless you really enjoy the taste of Bulletproof coffee, there aren’t many other reasons to replace your usual caffeine sources.

Let's Work Together To Take Your Fitness To The Next Level

You might be a fit for the Fitness Mastery mentoring program. Here's how to apply:

Step 1 - Book a Free Assessment Call
This is a complimentary session where we will talk about your goals and tell you what you need to get there.

Step 2 - If you're a good fit to join our mentoring program you will be invited.

Click the button below to get your free assessment.

[1] Adenosine, Adenosine Receptors and the Actions of Caffeine

[4] Lose Sleep, Gain Weight: Another Piece of the Obesity Puzzle

[5] Effects of acute ingestion of a pre-workout dietary supplement with and without p-synephrine on resting energy expenditure, cognitive function and exercise performance

[10] Tolerance to behavioral effects of caffeine in rats